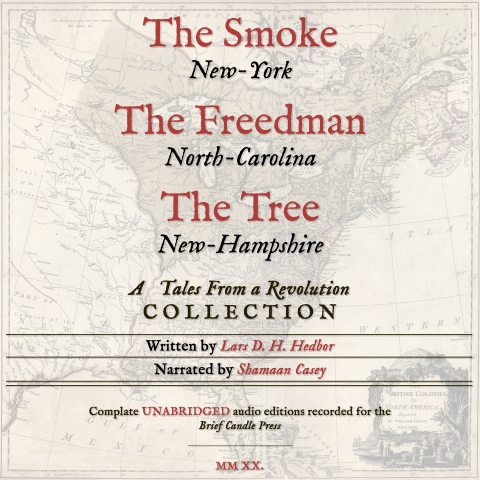 The Smoke, The Freedman, & The Tree: A Tales from a Revolution Collection

The question of how the American colonists made the long trip from being subjects of the British king to being citizens of the independent United States has nearly as many answers as there were people.

They should have been enemies, but they became brothers.

Joseph Killeen was sent into the wilds of frontier New York to eliminate the threat of savage enemies in the forests of New York, but when he meets Ginawo and his peaceful village of Skarure, he realizes that nothing is as simple as he was told.

The Haudenosaunee Confederation is being torn asunder by the American Revolution, forced to choose sides in a fight that's not their own.

Can Joseph and Ginawo bridge the divide between their peoples, when warfare threatens to destroy both societies?

What does liberty mean for a Freedman?

Calabar was brought from Africa to North Carolina as a boy and sold on the docks as chattel property to a plantation owner. On the plantation, he learned the intricacies of indigo production, fell in love, and started a family.

Abruptly released from bondage, he must find his way in a society that has no place for him but that is itself struggling with the threat of British domination. Reeling from personal griefs and drawn into the chaos of the Revolution, Calabar knows that the wrong moves could cost him his freedom - and that of the nation.

Planting the tree of liberty....

Abe is haunted by the sudden loss of both of his parents. Left to manage a New Hampshire time grant with only his eccentric aunt to guide him, he finds comfort in a new friendship with Betty, a decidedly odd neighbor.

Defying the grasping British officials and his aunt’s commands, Abe makes choices that put him on a collision course with both. With rebellion in the air, Abe must escape detection by the royal governor’s agents and solve the puzzle of Betty’s past in order to secure his future.