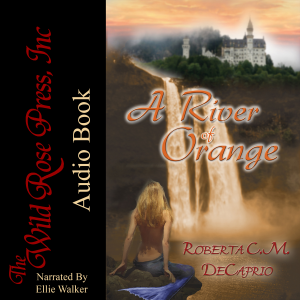 A River of Orange

Where is it written only men can be heroes?

Meav O'Shay didn't start out to be a hero...fleeing Ireland like a coward in the dead of night, after declining the proposal of the lecherous Hollister McGreary. After days hiding in the hull of the Sea Dragon - a British enemy ship bound for an unknown destination - Meav finds herself shipwrecked on an enchanted island and soon learns she's the answer to a prophecy.

Rule Thronton, heir to the isle of Keronia's throne, is cursed by an evil spell and destined to roam the island forever as half-man and half-beast. Disgusted with his plight, Rule turns away from life's joy and laughter, his heart empty of love...until he spots the lovely fire-haired maiden walking the white sands of Keronia in search of food.

Allowing Meav into his heart would free him from the evil witch Devora's spell. If only he could trust Meav's love...