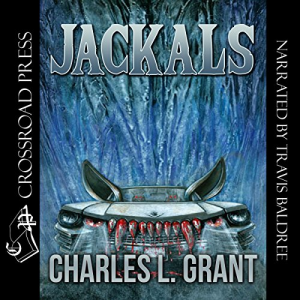 We've all seen them - the broken-down car by the side of the road, mutely signaling for help from passing drivers...the stubborn tail-gater who follows too close, for too long...the wild driver who weaves through lanes on a crowded highway...the driver who causes accidents but is never a victim of one....

These are the jackals, hunters who follow the nation's highways and byways, preying on the weak and unsuspecting. The jackals are human enough - except for a strangeness about their eyes, and the way their laughter lingers in the night air - but they have no mercy.

Jim Scott's been hunting jackals for some time now. They took someone he loved, once, and he's never forgiven them. And he's never loved again. Love makes you vulnerable.

But love isn't predictable, and when beautiful, battered Rachel turns up on Jim Scott's doorstep with a tale that can only mean she barely escaped a hunting pack, Jim finds that the barricades he built around his heart are not impregnable.

The jackals have come in force for their final showdown with Jim Scott. But Jim no longer fights alone - he leads a group of jackal-killers, each determined to exterminate the hunters or die trying.