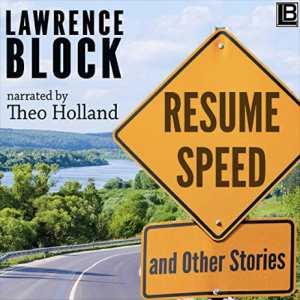 Resume Speed And Other Stories

"Dead to the World", which appeared under a one-shot pen name in Alfred Hitchcock's Mystery Magazine, has been lost for years, and the story of how it was lost and found is as interesting as the story itself.

The same is true of "Whatever It Takes", created over a quarter of a century ago and never submitted anywhere, because the author filed it away and forgot about it; he came upon it, dusted it off, and sent it to AHMM where it was published.

"I Know How to Pick 'Em" was created for Dangerous Women, the George R. R. Martin and Gardner Dozois anthology, and a holdback clause in the contract kept it out of LB's previous collections.

"Autumn at the Automat" was also created for an anthology, LB's own In Sunlight or in Shadow, and won an Edgar Allan Poe award as "Best Story of the Year".

"Gym Rat" has never appeared in print; it was ePublished as part of a Center for Fiction project. While fans have suggested the protagonist might return for further appearances, LB is doubtful. Still, he's been mistaken before.

"Resume Speed", the title novella, was published in hardcover (by the stellar Subterranean Press) and as a Kindle single (by the author). Subterranean's edition is out-of-print and hard to come by, and the story now appears in paperback for the first time. While it was created only a couple of years ago, it has its roots in a story the author overheard perhaps 40 years ago. All of the circumstances of its origin, and a good deal more about each of these stories, may be found in LB's foreword. But, if you don't care, you can just skip it and go straight to the stories!