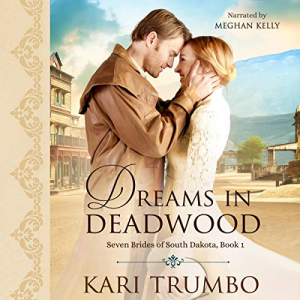 He has a vice as bad as her father.

Jennie Arnsby wants nothing more than to turn around and go home. Her family is on their way to Deadwood, South Dakota, when Aiden finds his way to their small wagon train. His teasing and banter leave her wanting to toss him out the back and in the dust. When they are separated outside the city, she is left wondering if she'll ever see him again.

Aiden Bradly wants to find his gold and return home. Nothing more. He can't afford to get tangled with a woman. He's doing just that until he meets the feisty Jennie. She gets him thinking about his past and forgiveness, but what's more important, his past or his new future?

Aiden will either redeem his past or claim a treasure greater than he could ever imagine, but he must choose one.

Dreams in Deadwood is book one of the Seven Brides of South Dakota series by Kari Trumbo. A romantic, Wild West romp in pioneer South Dakota.