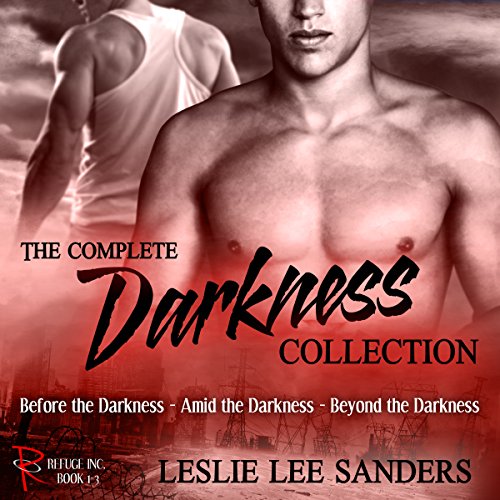 Includes all three installments of the Refuge Inc. series.

Before the Darkness (Book 1): After an asteroid strikes Earth, a series of violent earthquakes destroy secluded Phoenix and leave survivor Elliot struggling to stay focused in the bleak aftermath. He meets fellow survivor Adam and together they search for reliable shelter and other survivors while distant, murky clouds fast approach. Their hunt for shelter leads them down an alternate path when they find spray painted symbols directing them to a mysterious place: Refuge Inc.

Amid the Darkness (Book 2): Weeks after an asteroid strikes Earth, hurling Elliot and Adam into a fight for their survival, the two take shelter in an underground compound known as Refuge Inc. Shaking their past seems impossible as it comes back to haunt them, weakening the foundation of their relationship. Elliot, hung up on guilt over his former actions, tries to right his wrongs which leads him face-to-face with the troubling secrets of the compound. Adam's run-in with the enigmatic prophet makes him question Refuge Inc. and the survivors' future.

Beyond the Darkness (Book 3): Phoenix - a dark, vast ruin, speckled with sporadic rays of light pushing its way through the dark, dense clouds. Adam and Elliot wander the collapsed city for days before taking shelter at the nearly-standing Arrowhead hospital. Their days are filled with hopes of rescue and a deep need for emotional and mental closeness, until a harsh reality take over their thoughts - their food and supplies are dwindling, and they are in desperate need of assistance and reprieve. They're forced to return to the hellish compound, also known as Refuge Inc.