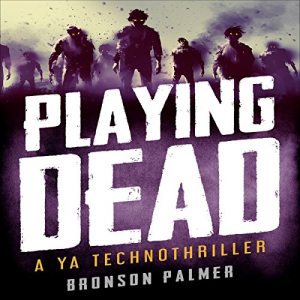 In the halls of Andrew Jackson High School, Jenaiya is a nobody. Less than a nobody. She's practically invisible. An awkward, shy freshman, she very rarely gets any attention beyond being bullied by the monsters who roam the hallways.

But in Age of Z, a postapocalyptic multiplayer video game, she's a gun-wielding, fast-talking GOD. She doesn't suffer fools lightly, and she's one of the most revered players in this near-future dystopian world of the undead. Through survival as one of the fittest, Jenaiya has learned the ropes of the online world. And what she picks up on very quickly is that the zombies are not the most vicious monsters in Age of Z. The real villains end up being the humans on the other end of this social media experiment.

When her favorite game goes on sale, the apocalyptic landscape is overrun with foul-mouthed trolls who take pleasure in overt sexism and racism. As an African American teenager, she's especially sensitive to that kind of cyber bullying, but she vows to not let it get the best of her. She's got her crew, and she's not prone to backing down.

Some people leave, give up, and some people just take up a different corner of the zombie-infested world. But Jenaiya won't. She refuses to. She knows the only way to move forward is to fight back. And she's not playing nice anymore.