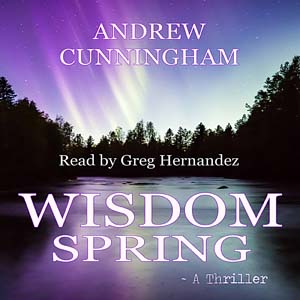 Jessica Norton is a woman on the run, a sensational lead item on the nightly news, accused of the murders of four of her fellow staffers for a U.S. senator. Jon Harper is a grieving father whose life has crumbled over the death of his young daughter. When Jon picks up Jess hitchhiking on a deserted Texas highway one rainy night, he is pitched into the middle of a massive conspiracy, one that threatens the very future of the United States.

From having nothing to live for, Jon suddenly finds himself the protector of someone with everything to live for, someone desperate to uncover the conspiracy that has ruined her life. Staying two steps ahead of the police, and barely one step ahead of the powerful organization that wants Jess dead, Jon discovers that Jess is harboring a secret of her own, a strange inner "voice" providing cryptic clues for them to follow.

Part political thriller and part chase novel, Wisdom Spring takes listeners on a fast-paced, suspenseful ride along the highways of the U.S. and Canada, into the far reaches of the Alaskan wilderness. Along the way, the two unlikely heroes transition from helpless prey into proficient hunters as the mysterious clues eventually lead them to a violent final confrontation with corrupt forces at the highest levels of government.