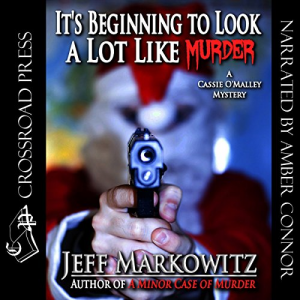 Cassie O'Malley is back in a Christmas mystery that will keep you laughing and guessing until the final showdown. At odds with her new boss, tabloid reporter Cassie O'Malley finds herself covering the shopping mall at Christmas. Cassie wants nothing to do with the assignment. Then Big Mack turns up dead in the men's room, his throat slit. Sensing an opportunity for 15 minutes of fame, mall security guard Oliver Berryhill spins a heroic tale of his confrontation in the men's room with the loan shark.

The police are skeptical, but Big Mack's son, the even bigger Little Mack is determined to avenge his father's murder. Barely a week later, a second body turns up in the employee break room and Cassie finds herself covering a double homicide. In a race against time, Cassie must solve the double murder before a third victim is killed in the wildly funny mystery It's Beginning to Look a Lot Like Murder.