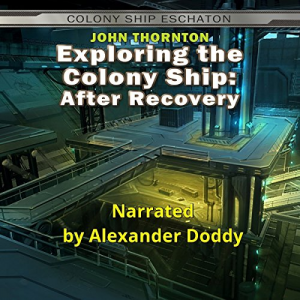 This is the 2nd book in the Colony Ship Eschaton series.

Jamie and Michael left behind an Earth which was a dry, dead, wasteland. The last place livable was Dome 17, but it was failing. Those people made a last ditch effort to survive. Though a bold and daring plan, they were able to reach what seems to be a derelict colony ship, The Eschaton, which is in mid-flight.

The Eschaton had been designed to hold numerous and diverse immense biological habitats: flora, fauna, and everything needed to terraform a new world. It also carried thousands of people in suspended animation. The ship was designed to be tended by crews who would live out their lives in the journey between worlds. That journey would only be completed after several generations had lived and died while in transit.

That was the plan. But something happened.

The people from Dome 17 have reached The Eschaton, but what will they find in those habitats? What systems are still functioning? Did any of the crew survive? What lurks deep in the bowels of a colony ship? Jamie and Michael will seek to unravel these mysteries, and survive, as they explore the Colony Ship.