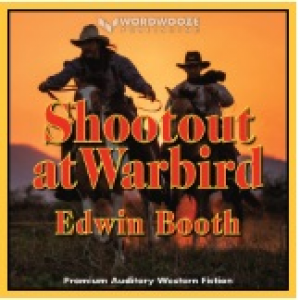 Son against father for rangeland justice.

What son could draw against his own father? That's the question Neil Wallace had to ask himself.

Neil admired his father, King Wallace, for building up the biggest ranch in the territory and defending it with guns blazing against rustlers and robbers. But Neil knew the days of the wild west and the taking of law into one's own hands were gone. Yet he was positive his father wouldn't be restrained by any scruples.

Now his father was planning to dam the river that supplied water to all the valley ranches and charge them rates that would keep every man-jack in debt to him forever. Neil was determined to stop King even if it took bullets to do it. But first he had to tell his father why a son might have to turn against his own blood:

"It's because you're trying to do something no man has a right to do. You're trying to make slaves out of free men...and you're not going to get away with it. Your scheme is going to blow sky high - and you along with it!"

And with those words, range war exploded in all its bloody fury, setting off a dynamite relay of greed, revenge, and gunpowder temper that threatened to destroy Neil and the ranchers he defended.