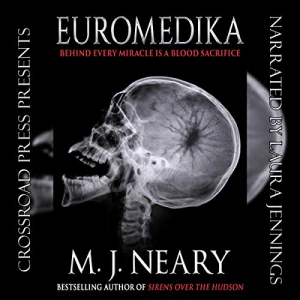 Hazel, a truant teenager, takes refuge in a seedy alley off South Street dubbed “Nicotine Alley” under the protection of Logan Massey, a cannabis activist who dominates the alternative scene. Her most prized possession is an Olympus camera that supposedly has a soul and is able to capture the unseen. Seduced by Logan's anarchist ideology, Hazel aspires to expose the corruption inside the pharmaceutical industry.

Martin Thomasson is Philadelphia's most eccentric medical student, whose body had been shattered in a car accident and reassembled by the city's top trauma experts using bolts, rods, and wires to hold his skeleton together. Despite the constant pain and hallucinations, the young man is studying to become a surgeon under the auspice of Dr. Dean McArthur, a languid, marble-faced sociopath. Such wonders can only happen at EuroMedika, a mysterious and eerie facility where chemical formulas and religious dogma mingle in a petri dish.

These two worlds collide when Hazel sets off to infiltrate EuroMedika and bring down Dr. McArthur. Her quest proves to be short-lived, as the overreaching urchin quickly realizes she is no match for a mad scientist. When she finds herself framed for a string of crimes, all of her high principles fly out the window. To save herself, Hazel must give in to Dr. McArthur's demands - which go beyond sexual favors - and assist him in a secret experiment with her old friends as test subjects.

Martin Thomasson, whose loyalty to the institute has begun to waver, could very well be her only hope for salvation. Wandering the sinister glass halls of EuroMedika, she learns that behind every miracle, there is a blood sacrifice.