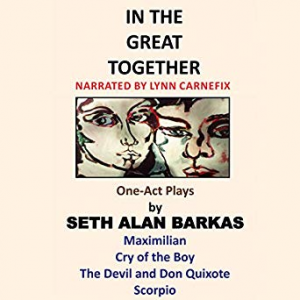 In the Great Together 1 Act Plays

Seth Alan Barkas was a film critic for Baltimore Magazine when he died, as well as a freelance theater reviewer for one of the two leading theater newspapers at the time. At the age of 23, on his way home from reviewing an off-Broadway play, he was attacked. These four unique plays are the work of an aspiring, talented playwright whose career was tragically cut short by his death following a senseless mugging.

Each of the one-act plays collected in In the Great Together resonates with sharp, memorable dialogue and diverse and powerful themes, plots, and characters.

"Maximilian" takes place in 1867 in a prison cell the night before the execution of Maximilian, the former Emperor of Mexico. A fellow aristocrat, smuggled into the prison as a stable boy, tries to talk his friend into leaving Mexico and returning to Austria, rather than be executed.

"Cry of the Boy", a more existential drama, delves into the everyday life of a 17-year-old boy and his relationship with his mother and father.

"The Devil and Don Quixote" is an original application of the classic Cervantes tale to the story of Don Quixote, a man who has just escaped from an old age home aided by his former attendant, Sancho.

"Scorpio" explores the relationship between a 20-year-old woman, named Tom, and Stanley, a 19-year-old who wanders into Tom's apartment as he goes door to door in a Bronx apartment building, selling merchandise made by the blind.