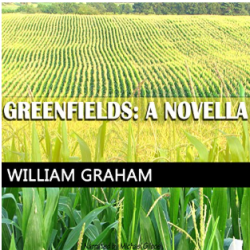 Set in the future, in the fictional land of Aradmore, this audiobook chronicles the struggles of James, Helena, and their family. After a climate disaster, society is now run by a group of corporate leaders called the Titans, who live in gleaming cities while ordinary workers, like James and Helena, are forced to live on reservations. All laws are made by - and all privileges are held by - the Titans.

Residents of the reservation struggle to survive. Citizens are not allowed to live past the age of 75. James and Helena decide they must break away. They leave on a trek to the district of Greenfields, where they can start their lives over again.

Greenfields is the thrilling story of how one family fights to overcome social injustice.