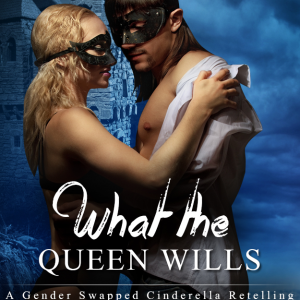 What the Queen Wills: A Genderswapped Cinderella Retelling

In a magical kingdom far away, there lived cursed princes, warrior women, and powerful heroes. This is a sexy genderswapped retelling of the classic Cinderella fairy tale where the heroes have become heroines, the heroines have become heroes, and nothing is as it seems.

Eliot is sexy, sensitive, and smart. He is also tired of scrubbing floors for his bullying older brothers. While they scheme for more social power, Eliot dreams of attending Queen Cassandra's Gathering, an elite soiree for only the most sexually skilled, and meeting the woman of his dreams.

Perhaps he's already met her. Kind and lovely Amelia is Eliot's brothers' most overworked servant. But when her good intentions are rewarded with violence, she's forced to flee and take a job at the palace under the eye of the gorgeous and powerful Queen Cassandra.

As lust...and perhaps something more...begins to kindle between Amelia and the Queen, does Eliot still have a chance?

In this polyamorous tale of seduction, liberation, and intoxicating strangers, even the humblest of peasants has a shot with the queen if she so wills.