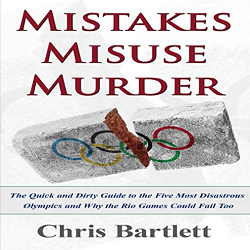 The legacy of an ancient culture.

A marvel of the modern world.

An opportunity for a host city to embarrass itself royally...

It is now 120 years after the first modern Olympic Games, and the tradition is as strong as ever. Over 200 countries and 10,000 athletes will gather in Rio de Janeiro for the 2016 Summer Games. The ancient host city of Olympia may have crumbled to dust, but the Olympics capture the attention of the world like no other event.

But how much do you know about this esteemed affair - both its ancient origin and its modern incarnation - and the downright disaster it has sometimes turned out to be?

Here's your chance to learn about some of the most catastrophic Olympic Games in history, from the Munich massacre to the St. Louis sideshow. You'll even get an oracle-esque glimpse of what could befall the 2016 Olympics in Rio de Janeiro.