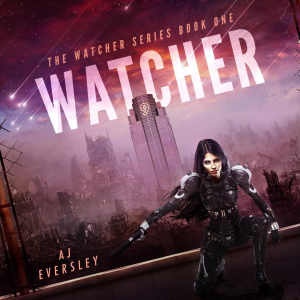 Sawyer’s life is simple, if not easy. Her home might be in ruins, but she can protect what’s left of it.
A city destroyed by the bots - that’s home. Humans have been hunted, but Sawyer is one of a few who have turned the tables. She’s a watcher. Taking out the bots one by one. Protecting what’s left. It’s the carbons she needs to be wary of. Faster and stronger than humans, they’re dangerous. But Sawyer’s smarter. That will keep her alive.
At least, that’s what she believed. But the carbons are evolving, and their plans are ever more cunning. Suddenly her friends are dying. Safety can no longer be taken for granted - not even for the watchers. At least she has Kenzie. Love is a strong word, but whatever they have, it’s what keeps her going.
Embarking on a desperate mission to save humanity from extinction, Sawyer discovers that the line between friend and foe is no longer easily drawn when one of her own betrays them.
And when a horrific plan comes to fruition, Sawyer will have a choice: who to save, and who to let go.
Divergent meets Terminator in this epic YA trilogy.