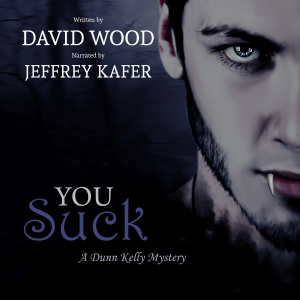 Dunn Kelly hardly ever has a problem covering for his alcoholic father. As the only Special Populations detective on the police force, his dad's responsibilities usually consist of freeing zombies entangled in turnstiles, checking rabies tags on werewolves, and sweeping up vampires who oversleep while moon bathing. But when teen pop star Delilah Idaho sees a wrinkle on her forehead, his world is turned upside-down. His town is the host to a new television show- You Suck, a reality show where vampires, from sparkly to old school, compete for the privilege of biting Delilah, keeping her young and beautiful forever. But a murderer is loose on the set and it's up to Dunn to save his father's job and solve the mystery. Oh, and his teacher is hitting on him, the football coach hates his guts, and he might lose his spot on the swim team. Like the television show, Dunn's life sucks.