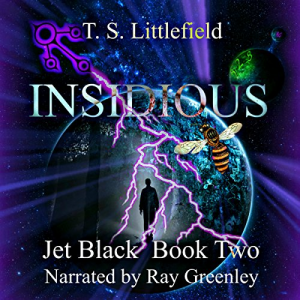 The story of Jet Black continues, and more of the mystery unfolds as Jet and his friends prepare to rescue the remaining children held at Miracle Manor by the sinister Dr. Drexler.

More clues come together to reveal a larger picture as Drexler's plans come to light, piece by insidious piece.

Grandpa's story is continued, which further sheds light on the history of Nebulous and the Key holders who came before Jethro Black.

The Enigma of Serenity further unfolds, and as Fig embarks upon this new world, opportunities are discovered for expanded perception and insight, not only into the past, present, and possible future, but perhaps into the very nature of mankind's existence.

Insidious is the second release in the young adult science fiction series...Jet Black.