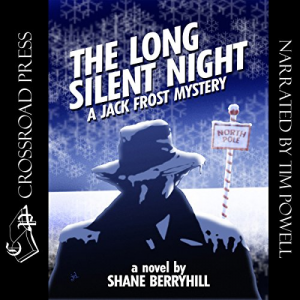 The Long Silent Night: A Jack Frost Mystery brings together the unlikely bedfellows of film noir and fantasy to create a surprising holiday thriller, sure to be enjoyed by all ages!

It's up to Jack Frost, a winter elemental and the North Pole's premiere private eye, to find his kidnapped adoptive father, Santa Claus, so that the Spell of Eternal Night - the spell that makes Christmas Eve last until Santa has delivered all his presents - can be lifted and time allowed to flow once more.

At first, Jack suspects Old Man Winter, the crime kingpin of the North Pole who also happens to be Jack's biological father. However, when their encounter leaves Jack uncertain of Winter's involvement, at the urging of his old friend Dee, a Halloween witch, Jack agrees to visit Holiday Town (H-Town), the capital city of the Holiday Folk, to consult with the city mayor, Father Time, about the case.

Combining the fun of The Santa Clause with the grit of The Maltese Falcon, The Long Silent Night: A Jack Frost Mystery is a hard-boiled fantasy-mystery thrill ride for parents and children alike!