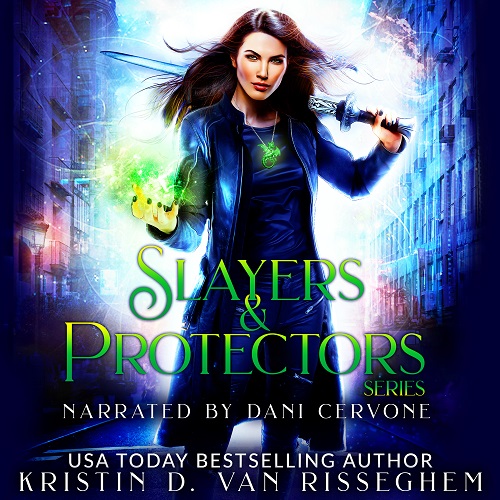 A reverse harem series with a powerful magical heroine, a mystery that’s dying to be solved, and four smoking hot dragon shifters. This series will be your latest reading addiction!

Brooklyn is New York’s newest up-and-coming dragon slayer. Known as a Kill Shot, an elite assassin who can destroy dragons with one blow, Brooklyn is descended from slayer royalty. As her magic becomes more powerful—and more destructive—than it should, she seeks the help of four guys with unique abilities of their own.

Then love happens. The boys are hiding something, and are more than they appear. They’re stronger. Faster. Dangerous.
But things are about to go from bad to worse. Brooklyn isn’t just the strongest slayer alive—she also has no idea who she really is, and once she discovers the truth, her entire world will be changed forever.

* * *
A suspenseful urban fantasy combined with the best of paranormal romance, Dragon Slayers is a young adult novel packed with spells, secret kisses, and multiple forbidden romances. This edgy book by USA Today Bestselling author Kristin D. Van Risseghem will have you turning the pages all night!

Brooklyn just discovered she’s the only female dragon in existence—and the key to everything. She can see things others can’t, and summon strength no one else can. Brooklyn attends York Academy, a school of NYC’s elite, to get her magic under control, though her rapidly manifesting powers are too much for her inexperience.

But her unbound magic is nothing compared to the four guys that want to protect—and share—her as a girlfriend.

A battle between the slayers and the dragons is brewing. Brooklyn has one choice. She must address the Slayers Council, and make a peace before the dragons attack again and wipe out the Academy.

With the help of her boys, it should be easy … but nothing in Brooklyn’s life is ever easy.

It’s time to prepare for war.

* * *
A continuation of a new young adult series by USA Today Bestselling author, Kristin D. Van Risseghem, readers NEED to put Dragon Wars in their shopping cart. Packed full of dragon shifters and sensual kisses, this is the perfect book to feed your reverse harem addiction. Meet four tough, sexy, sweet, and confident guys who will give anything for their strong heroine.

Blamed for the deaths of fallen slayers, Brooklyn has been labeled a traitor. People she once considered her friends are now hunting her, and the death of the city’s Pride Leader has left her picking up the pieces. Brooklyn is neither ready nor prepared to become the new chief of dragons.

Until the worst happens.

One of her Protectors is being held hostage— and if Brooklyn doesn’t comply with the kidnapper’s demands, she might lose him forever.

But time is running out, for both Brooklyn and her Protectors.

Love might not be enough to save them this time.

* * *
The third book in the Slayers & Protectors series, Dragon Protectors is a reverse harem paranormal romance featuring a strong heroine trying to save her boys and prevent an all-out war. Find out what everyone’s been talking about and become immersed in this magical fantasy readers call suspenseful and addicting.