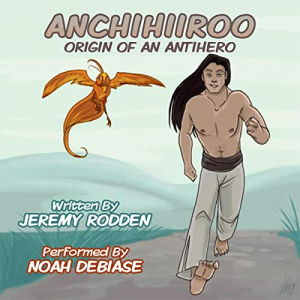 Anchihiiroo - Origin of an Antihero

Author note: Tales from Toonopolis is a non-linear series of "side stories" or other genre-specific adventures taking place in a single section of the cartoon city. This story takes place in Animetown, the section of Toonopolis inspired by anime and manga and operates with the tropes of those forms of media. It would best be classified as a young adult coming of age adventure...with my Toonopolis flair!

In Toonopolis: Gemini, Anchihiiroo (aka Han'Eiyuu) is the former hero of Animetown who turns Rogue after meeting the devious Shadowy Figure, forcing his creator to change him into a villain instead of the anti-hero he once was. Yuki, the albino inventor of Wan-Wan, described Anchihiiroo's background:

"He had a terrible childhood. He was orphaned at an early age when his parents were killed in a war. Then his orphanage burned down, and then a flood wiped out the town his orphanage was in. He was the only survivor".

Learn the full origin of Anchihiiroo, from his tragic childhood as Yoshi of Higeki to the warrior training that allowed him to put a stop to the Ninja-Pirate War that plagued Animetown. Witness his relationship with the phoenix Suzaku and his inevitable Rogue turn after meeting the mysterious Shadowy Figure. It is a story about destiny and a young man's desire to make his own path in the world.