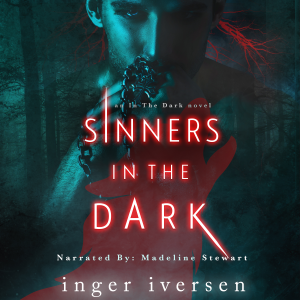 Sinners in the Dark

Depending on who you talk to, the Nation is either corrupt or a necessary evil. The Sect was formed to eradicate all things vampire, or maybe it’s just their mission to protect humans. Echo has been on both sides. He was once a Watcher for the Nation, but when he uncovers an ongoing plan to kill chosen Sect leaders to force war, he is driven to make a decision Echo never thought he’d make.

Echo becomes a Ghost, the name used for traitors of the Nation. It’s a dangerous way to leave the Nation, but Echo is sick of all the blood on his hands. However, leaving the darkness behind isn’t as easy as he thinks. Choices he made might cost him the one person that could help redeem his soul.

Orphaned as a child, Olivia lives for one goal - to avenge her family's massacre. She has spent the last four years wading through the blood of vampires. When she met Echo in battle two years ago, there was instant chemistry. Now, he is not only a part of the Sect but her new partner.

Will she be able to set aside her hatred for vamps to expose the Nation for what they really are?