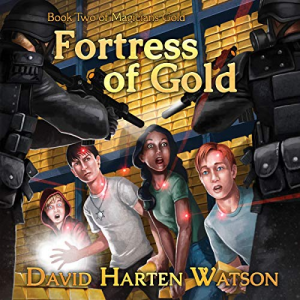 Enemy sorcerers destroyed the gold that powers white magic on Rados, leaving the Kingdom of Eldor defenseless. A prophecy said the only hope of restoring the gold was for 16-year-old Pran to travel to the mythical world called Earth with three companions: Jelal, a spy whose accident with an eternal youth spell at age 12 cursed him to remain that age forever; Pran’s classmate Samir, who nearly killed Pran last week (but that was before they discovered they’re cousins); and Vitina, the exotic enchantress Pran fell in love with at first sight.

They arrive on Earth in New Jersey, a foul-smelling place infested with millions of horseless carriages. The prophecy leads them to the family destined to be their native guides, but then their plans go awry. Although they brought diamonds to trade (knowing Earthlings consider those useless rocks valuable), they learn it's hard to trade diamonds the size of eggs for gold. The FBI believes they’re international jewel thieves or diamond smugglers, Samir is captured, and the others must rescue him.

Pran begins questioning whether his love for Vitina is real or, as she believes, a magical side effect. Adding to his confusion, Pran is torn between his feelings for Vitina and a new, totally unexpected love interest - another boy. The only way to get enough gold to save their kingdom is to pull off a daring daytime heist of the most heavily-guarded building on Earth!

And Jelal has secret orders to steal other items from Earth besides gold....